The Impact Inflation Has on Streaming Service Prices

If you look at the news in late 2021 and into 2022, you will see the word “inflation” pretty much everywhere. It gets so much attention because it is an important indicator of the economic health of a country and because it can have such a big impact on our lives.

In truth, no area of life doesn’t get impacted by inflation. How much inflation impacts something, however, varies widely.

Streaming services are not immune to the perils of inflation. Here’s everything you need to know about how inflation impacts our ability to pay for and watch TV.

What is Inflation and Its Record Rise

As an economic concept, inflation simply refers to the growth in the price of goods from one point of time to the next.

It is measured using the Consumer Price Index (CPI).

The CPI tracks the prices of several goods that have been deemed relevant and important to daily life, ranging from gas and food to the price of a beer or a ticket to the movies. The rate at which the CPI increases, usually from one quarter to the next, but also from year to year, is known as the inflation rate.

In other words, if the inflation rate is 3 percent, this means that prices are three percent higher than they were twelve months ago.

This rate doesn’t apply flatly across all areas of the economy. Prices in one sector may jump more or less than another, and sometimes at considerable rates.

Inflation is a normal facet of a functioning, growing economy. Typically, it is considered normal for inflation to be 2 percent or a bit lower.

In early 2022, inflation is currently at 8 percent, the highest it has been since the 1970s. Here’s a look at inflation rates over the past century in the United States: 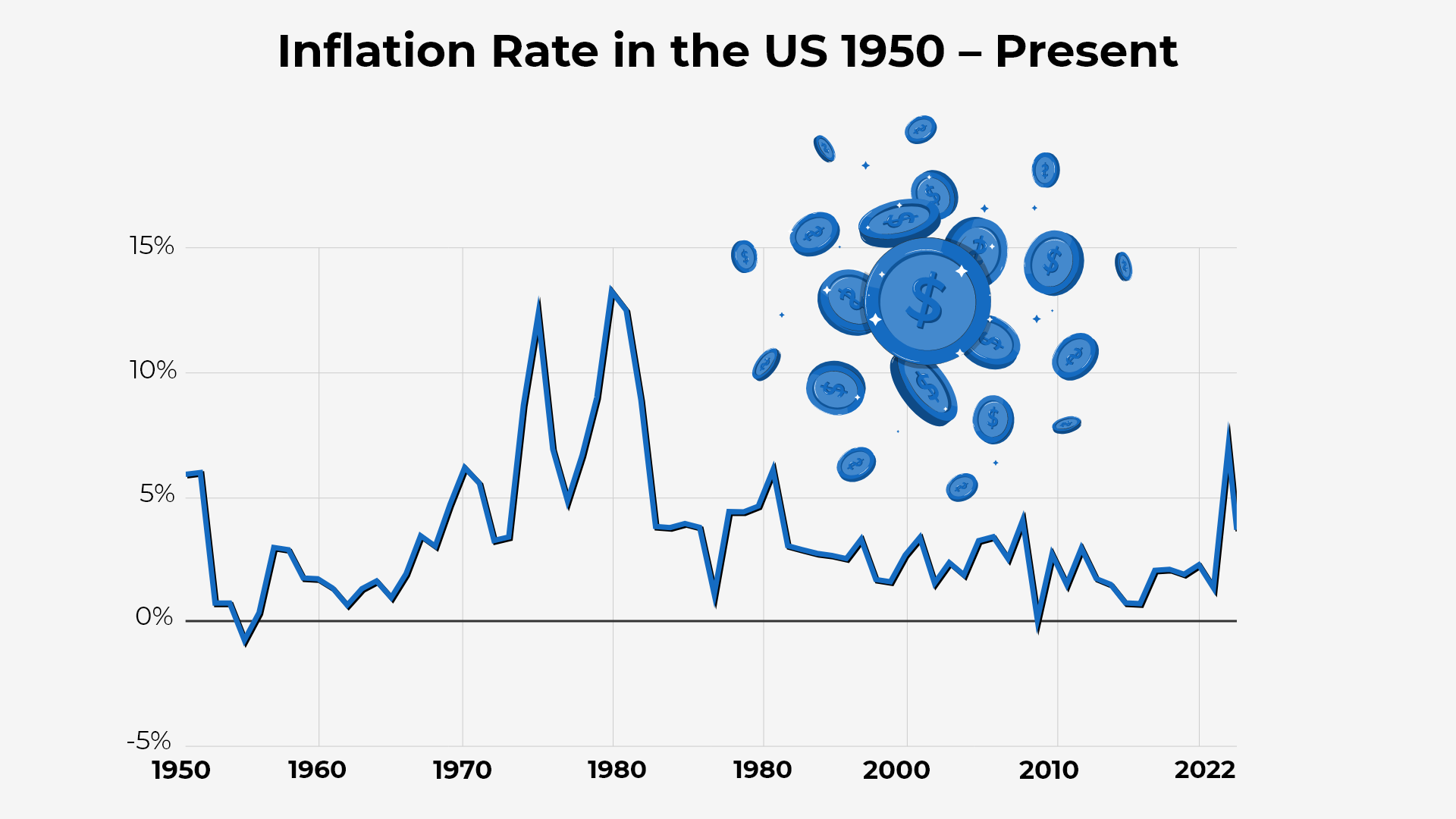 As you can see, current inflation rates are at almost unprecedented levels, and this is why so many people, from economists to politicians, are concerned.

There is no one answer to this question. Economies are complex and outputs often occur as the result of multiple inputs.

One cause of inflation is simply economic growth. As an economy grows and increases its money supply, the value of each currency unit drops just a little. This is made up for by the slow increase in prices. This is why a little bit of inflation is actually a good thing. It’s a sign that the economy is growing and working properly.

Inflation can also be caused when the demand for goods outpaces supply.

In other words, people, for whatever reason, have more money or more desire to spend it. As demand increases, prices naturally increase, but then supply catches up to slow down the price increase.

However, if something happens, that prevents supply from catching up, and demand doesn’t slow down, then things start to spiral out of control and prices can rise more quickly than they should.

Currently, high inflation is the result of a combination of these factors, specifically: 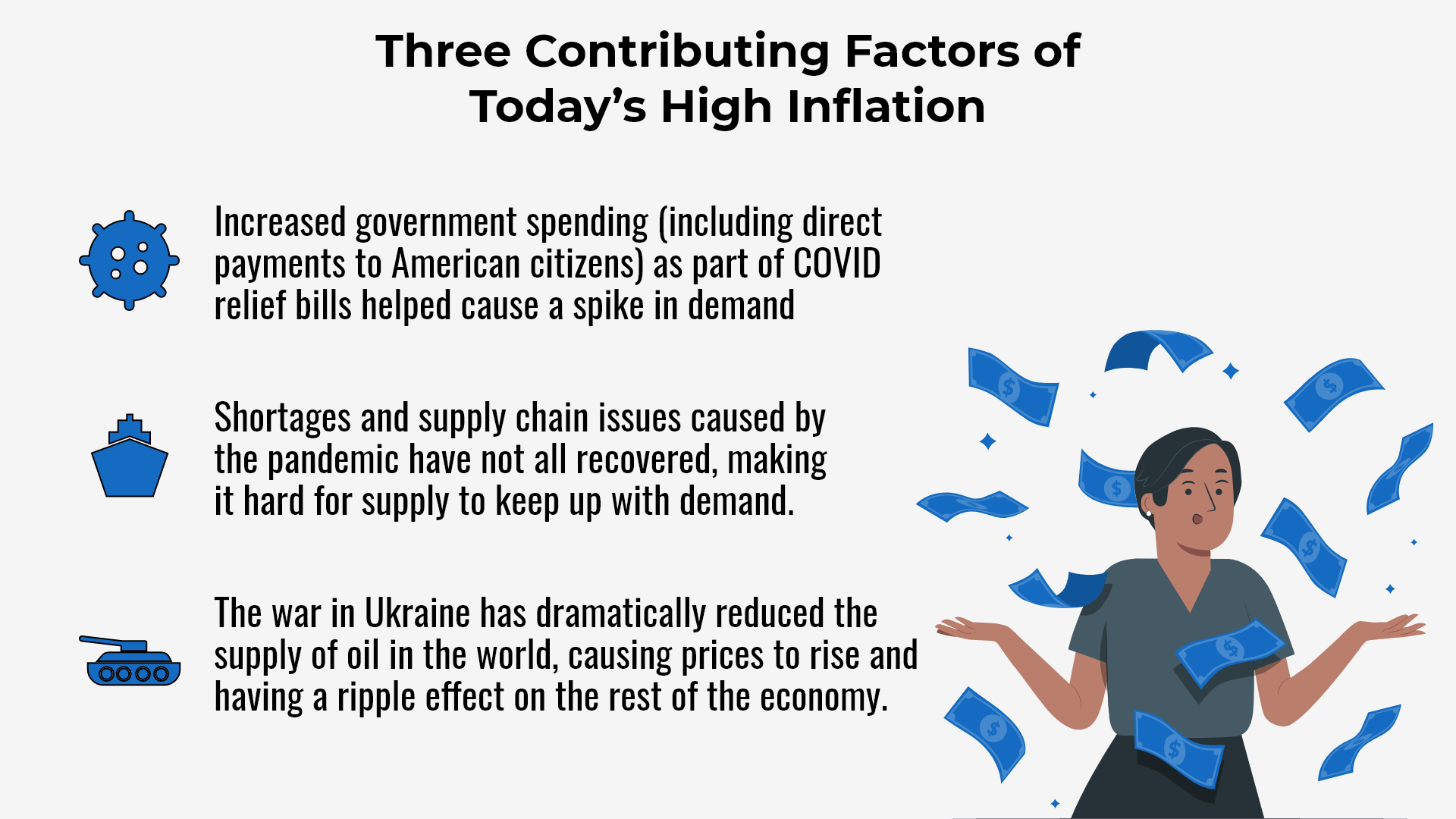 As mentioned, a little bit of inflation is not a reason to be concerned but is rather a normal feature of an economy. However, if inflation is left to run amok, it can cause all sorts of problems that range in severity. Some of the things that inflation can cause include: 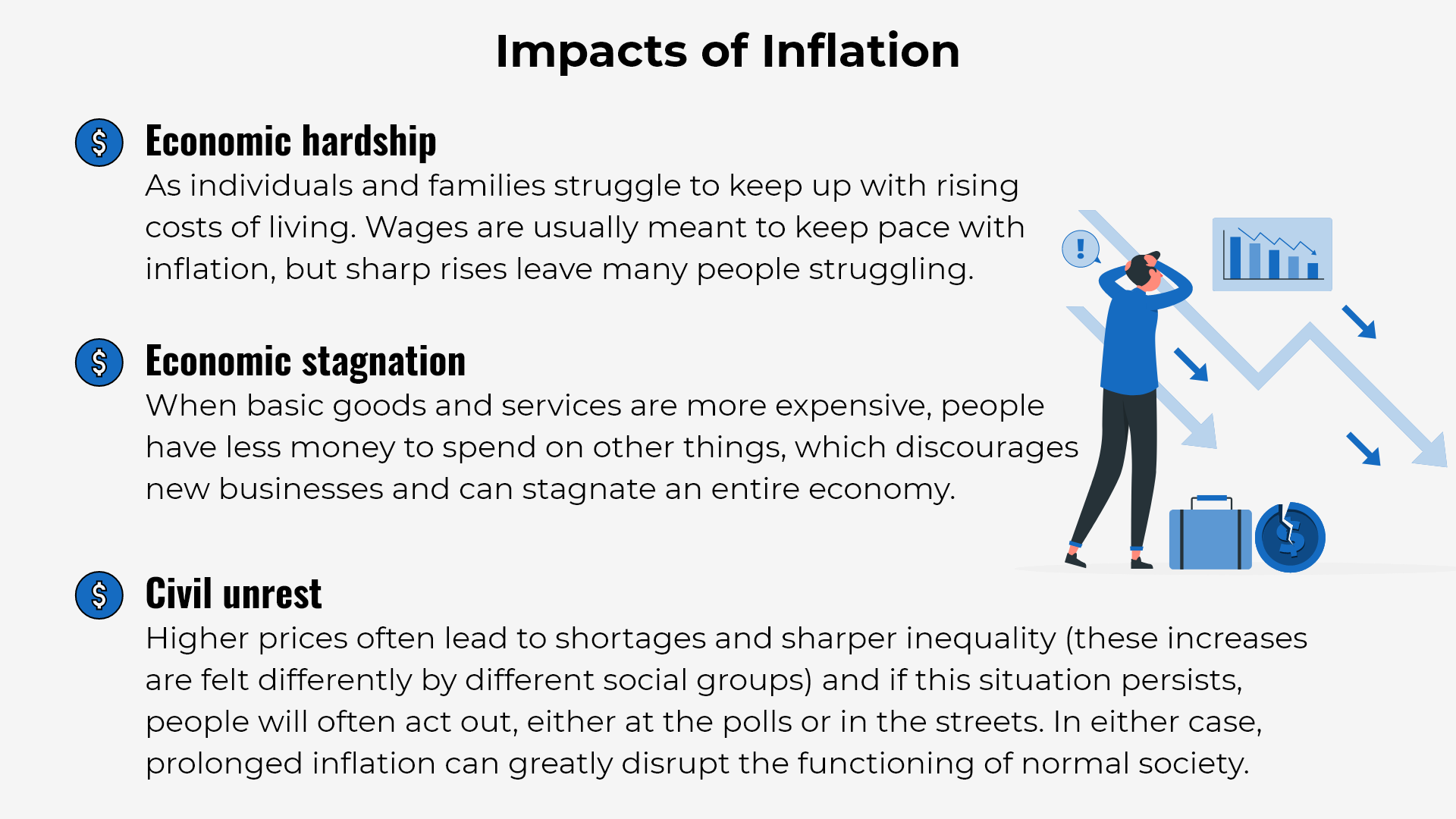 Okay, now that you have the proper background on inflation, what causes it, and its impact, it’s time to take a look at how it has impacted streaming service prices.

To sum things up, the impact on streaming prices seems to be negligible. Two major services, Amazon Prime and Netflix have both raised their prices, by $20 a year and $2 a month, respectively. However, it’s hard to say these price increases are the direct result of inflation.

Amazon, for example, continues to post record profits, so perhaps their price increase is motivated more by “We know people will pay more, so why not charge them?” Netflix has consistently raised prices over the past few years, a tactic that now seems to be common across all streaming services.

Part of the reason we can say this is that no other major streaming service, such as Disney+, HBO Max, or Hulu, has made any sort of meaningful price increase over the past few years, suggesting other increases have more to do with company policy than the rising costs of industrial inputs.

Other Impacts of Inflation on Streaming Services

However, while inflation may not be a big driver of rising streaming service prices, it is having an impact on the business, mainly putting it at risk for subscriber loss.

In general, streaming services have been doing quite well over the past few years. More and more people are ditching cable and becoming “cord cutters.” But inflation may cause that trend to reverse.

Why? Because people are running out of money.

As the cost of gas, food, prescription medicine, and everything else continues to climb, it becomes harder and harder for people to make ends meet. And if they get to the end of the month and are a little short, guess what is one of the first things to go? They’re streaming services.

Yes, these are important, but if faced with the choice between food and TV, the choice is obvious.

At the moment, this doesn’t appear to be a major theme in the US where inflation, while at record levels, isn’t quite as high as in other areas, particularly those more dependent on Russian oil and other Ukrainian imports. For example, many people in England saw their disposable income (what they have to spend after taxes and basic bills) drop by more than 50 percent, which did lead to major streaming subscription cancellations.

Whether this stays the same, or if it happens in the United States, depends on what happens throughout 2022. If inflation continues to rise, more and more people may be forced to make difficult decisions about how to spend their money.

At the moment, the biggest impact inflation seems to be having on streaming service prices is that it’s making them unaffordable for some. But not because the prices themselves are rising but rather because the price of other things is forcing people to make sacrifices.

However, this could change. As mentioned, prolonged inflation can have far-reaching effects on an economy and could cause streaming prices to rise on their own. Let’s hope this doesn’t happen. Until then, though, keep watching your favorite shows!