How to Watch Super Bowl LVI

The Super Bowl is a tradition for so many fans, families, and friend groups, no matter who is playing. It’s practically an American holiday, and it’s watched by people all over the world. There’s simply nothing like it in terms of hype, numbers, ad revenue, and a bunch of other metrics. Whether you love it for the gatherings, the sport, or the ads, there’s something for everyone.

And with that in mind, we want to make sure you can prepare early. What do you need to watch it? When is it coming around this year? Are there any special considerations to take note of? If you’re planning a party or even if you’re just watching alone, there’s a lot to know and a lot to organize. In fact, if you’re planning something, we recommend getting a notebook or quick document open, so you don’t have to come back here or check the details too often.

Here’s everything you need to know about Super Bowl LVI (and then some):

Before going into the details about when and where to watch, what can you expect to see this year? Some football for sure, but everything else is up in the air. Here’s what we know so far: 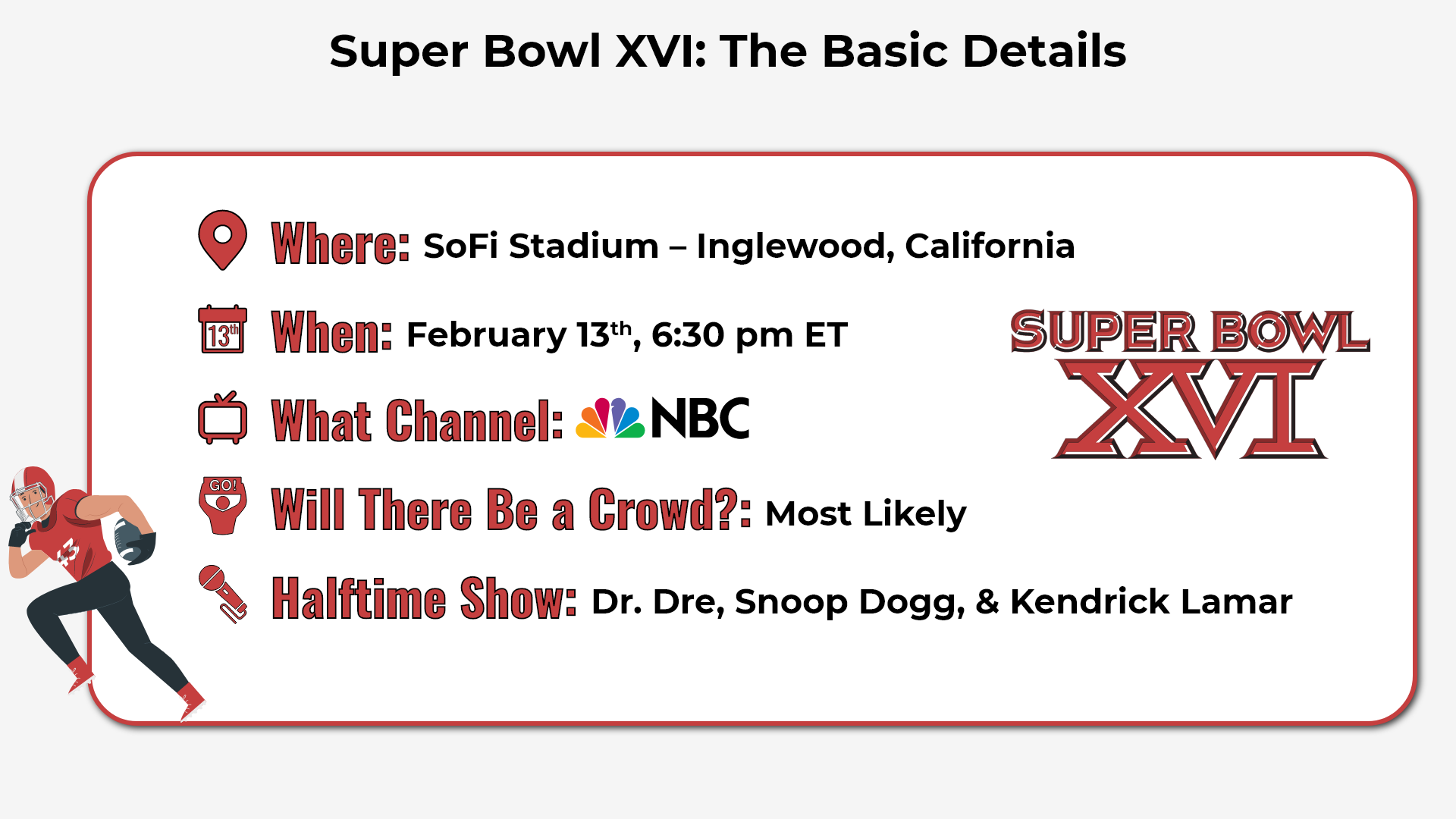 As of this writing (November of 2021), we are uncertain as to the teams playing in the Super Bowl yet. There might be a few favorites and some teams certainly seem unlikely, but the jury is still out on even who will make the playoffs. It’s a close year for many divisions, making it a pretty fantastic season. It’s one of those years where we’ll be waiting until the last week, and then we’ll have to see how the playoffs go. If you’re going to follow the playoffs, the conference championships are scheduled for January 30th, 2022 (further details to be determined).

However, once the teams are decided upon, we guarantee that the info will be easy to find, especially if you are a football fan. The second the news is available, the internet will be plastered from top to bottom with updates on the subject.

Most of the time the Super Bowl is not held at the home stadium of either of the teams playing. Instead, it’s held on a schedule made well in advance, both to better prepare everything involved and to give new cities exposure to the crowds and to avoid a sense of favoritism to any particular team.

Super Bowl LVI will be held in SoFi Stadium in Inglewood, California. The home of the Los Angeles Rams and the Los Angeles Chargers, it will be the first time the venue hosts the Super Bowl.

This year’s season of football is a bit shorter than usual, leading to an earlier Super Bowl than we might expect.

Will There Be Fans?

Something noticeably absent from the start of the pandemic for a while was the fans not being present at games. While each sport opened back up at its own pace, first without a crowd and then with crowds (or at least limited crowds), broadcasting had an interesting time of it. It was strange for audiences to watch a game with no crowd noise, crowd cuts, or the like. It was just as weird to see cardboard cutouts, CGI crowds, and pumped-in crowd noise.

Naturally, with the Super Bowl being a huge in-person event with tens of thousands of people, if not more, there are concerns about the spread of disease. Therefore, officials have had to think long and hard about how to hold it. However, the public and venues are better prepared than they were this time last year.

And while we can expect some advanced measures to protect public health, we also expect that there will be in-person fans this year. All signs point to this being the case, though of course, anything can happen, and we cannot predict the future, (especially when it comes to this).

Most years there’s some pressure on the halftime show to be better than the previous year, and we don’t expect it to be all that different this time. The Weeknd did an amazing job last year, but organizers decided this time they'd throwback to a little bit of recent history that’s still current.

The entertainment for this year includes some of the best artists hip-hop has to offer. We have Dr. Dre, Snoop Dogg, and Kendrick Lamar. These are beloved people in the Southern California area, and we can’t wait to see what the trio brings to the stage. Joining them will be Eminem and Mary J. Blige, two artists who could easily headline the show all by themselves.

When and Where to Watch Super Bowl LVI on TV

Now that most of the details are out of the way, how do you watch it? When, where, and how do you get to see the big game on TV? It’s usually pretty easy to find, but here’s all the info in case you want to plan ahead:

The channel that airs the Super Bowl generally goes back and forth between CBS and NBC. This year it will be on NBC. The exact channel number may vary depending on your cable package or area, but it should be easy to find. No matter where you are in the country, NBC is where you go.

Some great news is that the game is going to also be broadcast in Spanish live through Telemundo, so you have another option if English isn’t your first language.

If you live outside of the United States, then you might need to look a little harder, if it’s being shown on standard channels. UK viewers can watch the game on Sky Sports. Seven Network will have the game in Australia. In Canada, several channels will have the game. If you want the comprehensive list then the NFL has a great resource for you, linked to here. If you don’t see an option, don’t worry, we’ll go into some online methods shortly. Note that the full details aren’t here yet in some cases, so double check a week or so before the game to take extra care.

When to Watch in Different Time Zones

You’re probably used to the conversions by now if you live in the United States, and a quick search online will get you a converter ready to go for you, but here are some common time zones and the start times for quick reference. Note these are for kickoff, and not necessarily the starting time of the broadcast: 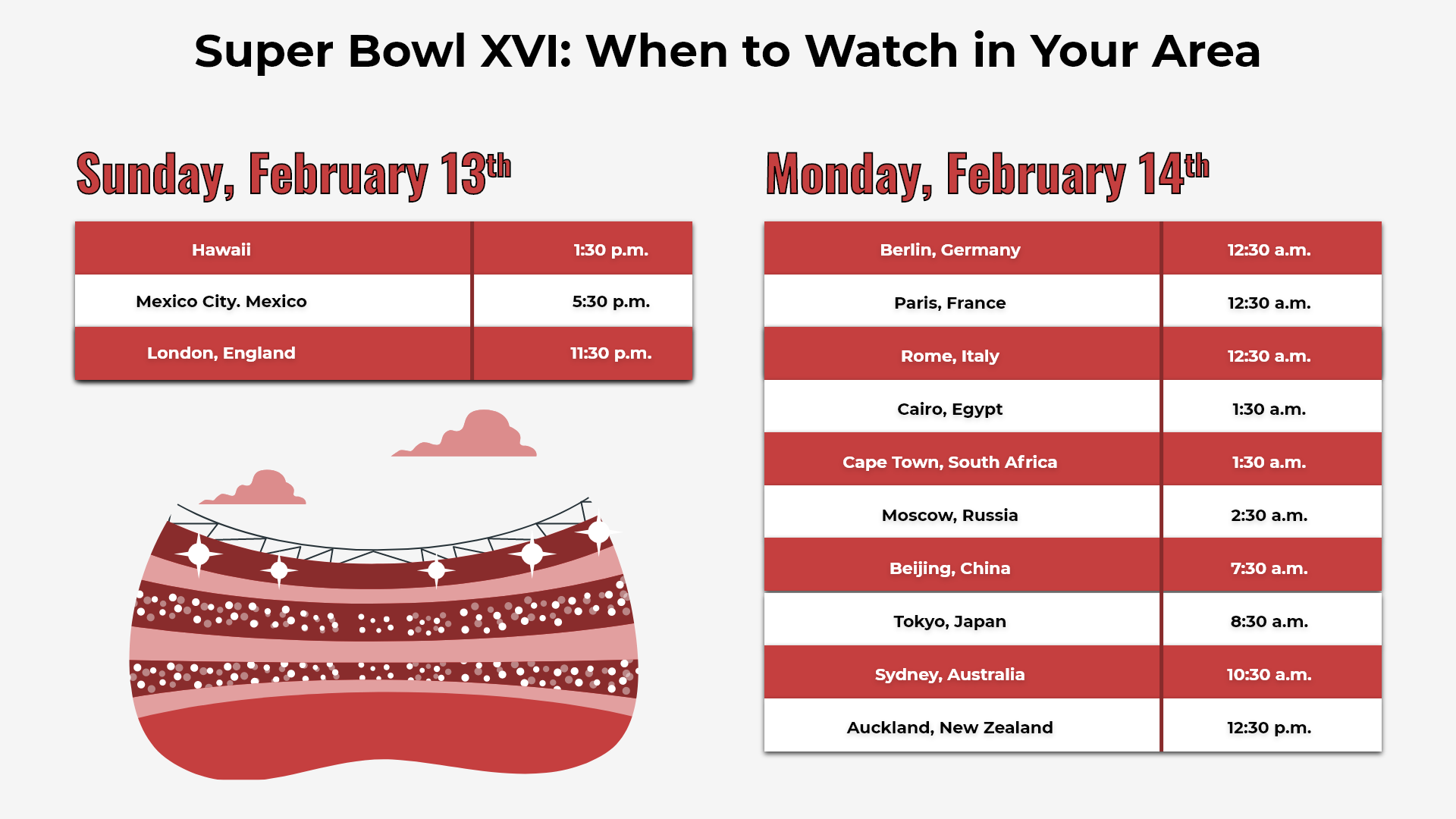 Perhaps you don’t have much of a TV or entertainment system, you’re watching by yourself and like your computer setup more, or have another reason why a TV isn’t the best option. Fortunately for you, there are tons of streaming options for Super Bowl LVI:

One more note: if like many people you have a great internet connection and a television, we recommend using both for the best experience. There are plenty of ways to hook up your streaming device or your computer to your television, effectively using your television as a monitor. This will allow you to get the most out of every device and service involved. Chances are all you need is an HDMI cable that’s long enough and you’re all set, though you can fine-tune the setup even more if you’re having a party.

Another option is to use a VPN to make it appear as though you are in the United States and then follow the instructions to watch the game online there. There might be a tiny bit of a delay, but it won’t be much different from the experience anyone else will have. They’re easy to set up on a computer (or even a phone) and they have a wide variety of other uses once the game’s over.

However, there are some drawbacks to using a VPN, especially for some people. Depending on where you live, there might also be a bit of a legal grey zone about using a VPN, so please consult local laws and regulations before diving into one. There may also be issues when it comes to your download speeds, as some VPNs are better than others, and the lesser options can slow down your connection. This makes the game less than perfect to look at.

There may be additional methods in your country, and finding the best method might come down to the region. Therefore, we strongly recommend you do some more research on this topic closer to the game time and on a more local level. There will almost certainly be a way if you have a good internet connection, so keep at it!

How to Make the Most of the Viewing Experience

Super Bowl is such a huge event, often complete with parties, food you probably shouldn’t eat any other time of the year, and more. Therefore, if you’re making a day of it, we want to help you make the best day of it. Here are some ways to do so: 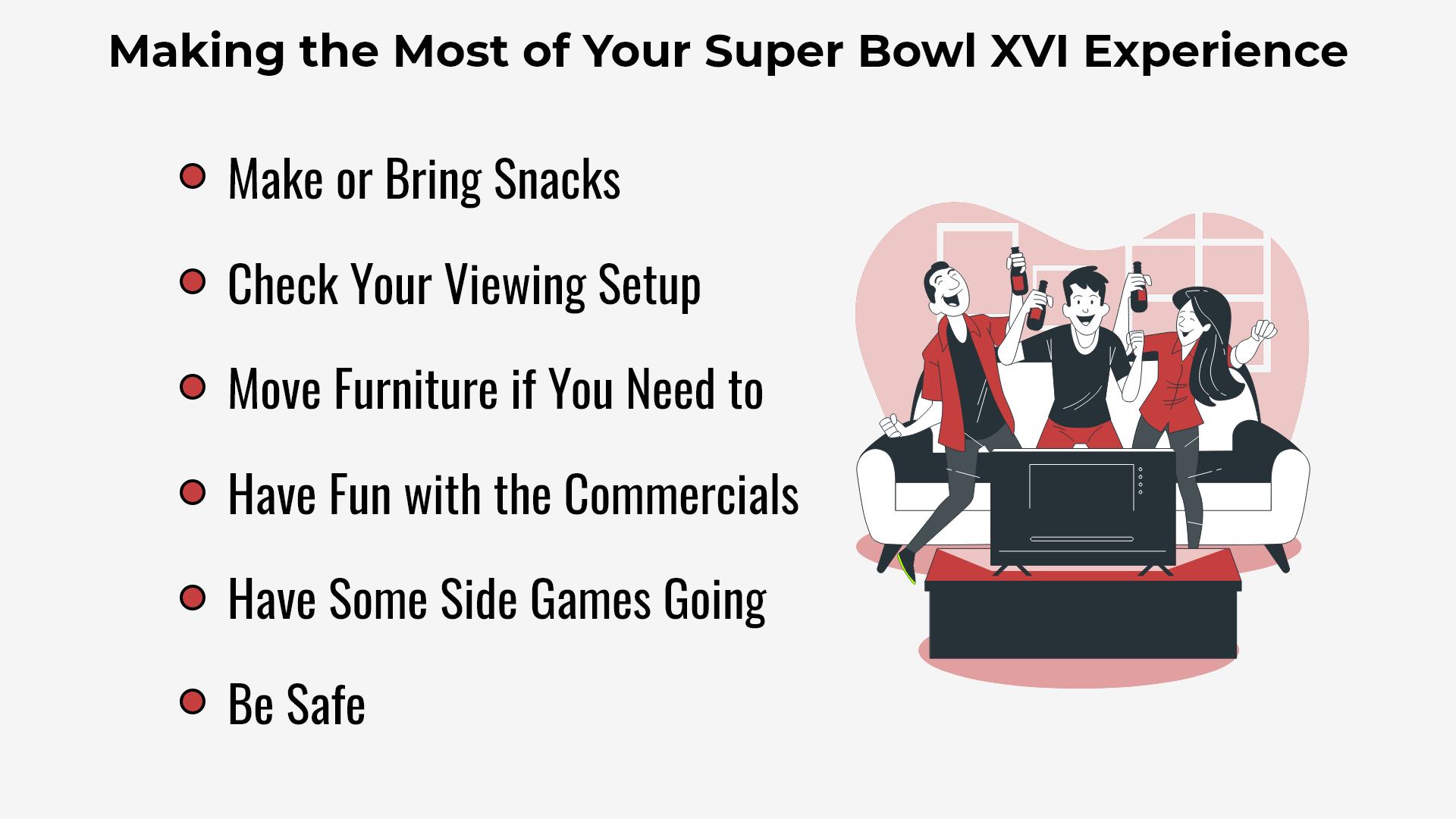 If You Are Pre-Recording the Game

If because of work or other responsibilities you can’t make the game itself but still want to watch it as if it were live, you can try to DVR the game and watch it at your own leisure. However, this will be a challenge. The game will be on every other TV in America, and people will constantly be getting updates on their phones (in some cases without asking for them). To avoid spoiling yourself on the plays and results, we recommend the following measures: 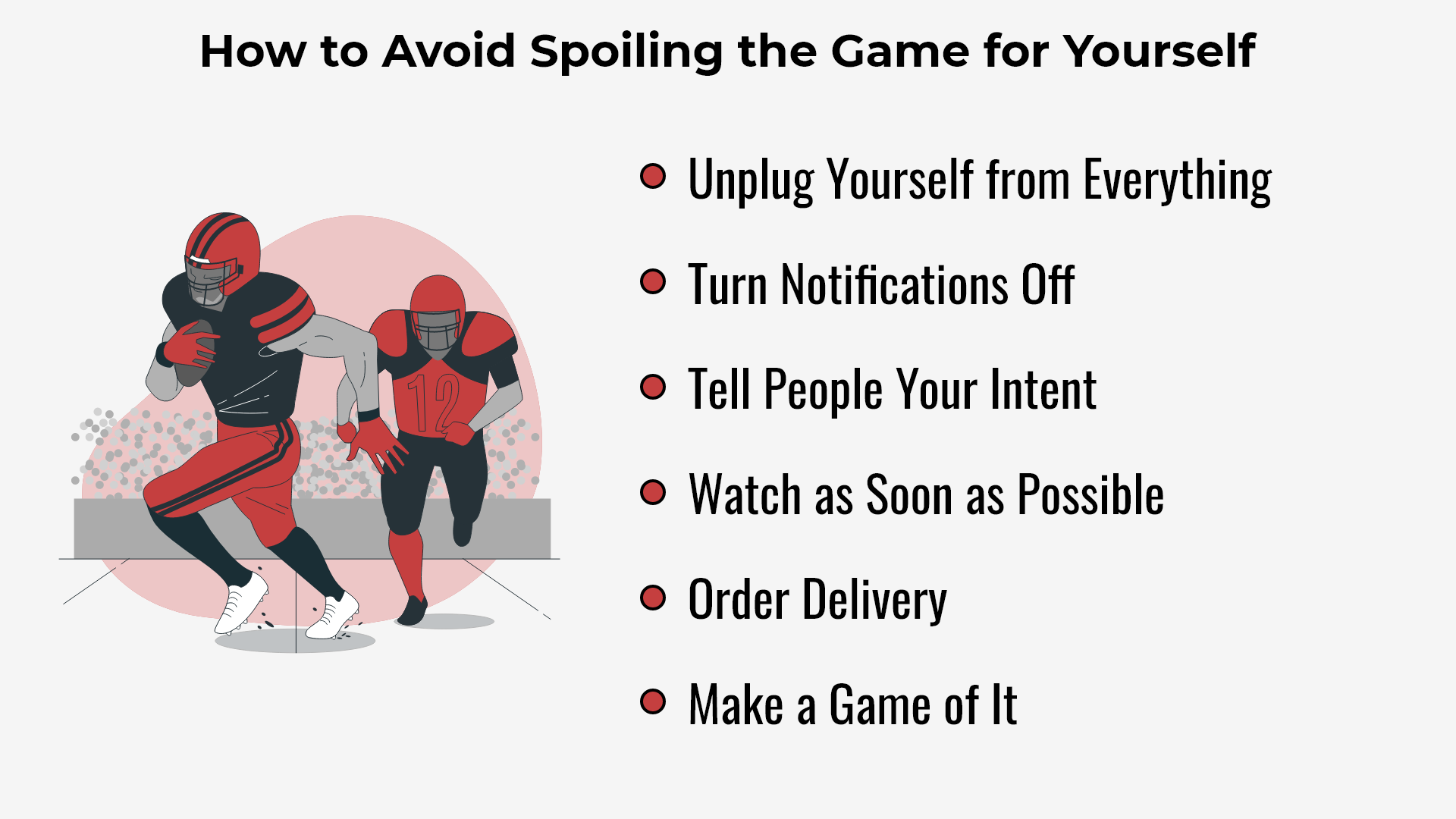 Overall, it’s up to you to find the best method, and you know your environment and social circles best. Just think about it ahead of time and be careful right after the game.

Other Ways to Get in on the Action

Want to try something else? Maybe you want to make it a more social occasion for yourself. After all, half the fun is the social aspect (otherwise it’s mostly just a football game). Here are some ideas on how to involve yourself more and get a chance to watch with people:

While we don’t expect many of the major details to change given the planning and contracts involved (they can’t easily jump to a different stadium with just a few months’ notice), some things could change. The audience experience might change due to a problem with public health. Some channels might have technical difficulties. In truth, there are so many factors at play that something is likely to go wrong or be different, even if most of us don’t notice.

Just try to go with the flow and not plan too many details in advance that you can’t change. The date is likely to stick, but if things start a little late or early, it won’t matter in the end. Similarly, if you need to change how you’re watching, there will always be another option.

Super Bowl LVI is almost certainly going to be the biggest television broadcast of the year. We hope you enjoy it to its maximum potential, whether it is alone, with loved ones, or with people you can soon call your friend. Remember it isn’t just about the game or the teams, it’s so much more. Have a great time, and feel free to return to this page as needed to get the details.