We now have more ways to watch television than ever before. In addition to traditional cable, there are now many different streaming services available, each offering its own unique combination of content.

As a result, more and more people are "cutting the cord" each year, saying goodbye to their paid cable TV subscriptions forever.

For some, doing this is partially an act of defiance. The cost of cable TV has been going up far faster than the rate of inflation for some time. Also, cable companies aren't exactly known for their stellar customer service.

This gives us plenty of reasons to want to leave, as well as many alternatives.

However, is cutting the cord truly the best option? At first glance, it might seem that way, especially if you're frustrated with your current provider. Yet, cutting the cord comes with its own set of expenses, and you also need to decide if this truly is the best move for you.

To help you answer this question, we've put together a detailed comparison of cable TV vs. streaming costs in 2022. Here's what we found:

Cable vs. Streaming at a Glance

Since cable is the incumbent, they have a distinct advantage. Most of us stick with it because it's what we have, and we can't be bothered to change. To find out if this approach is the right one, here's a full breakdown of what's good and bad about cable. 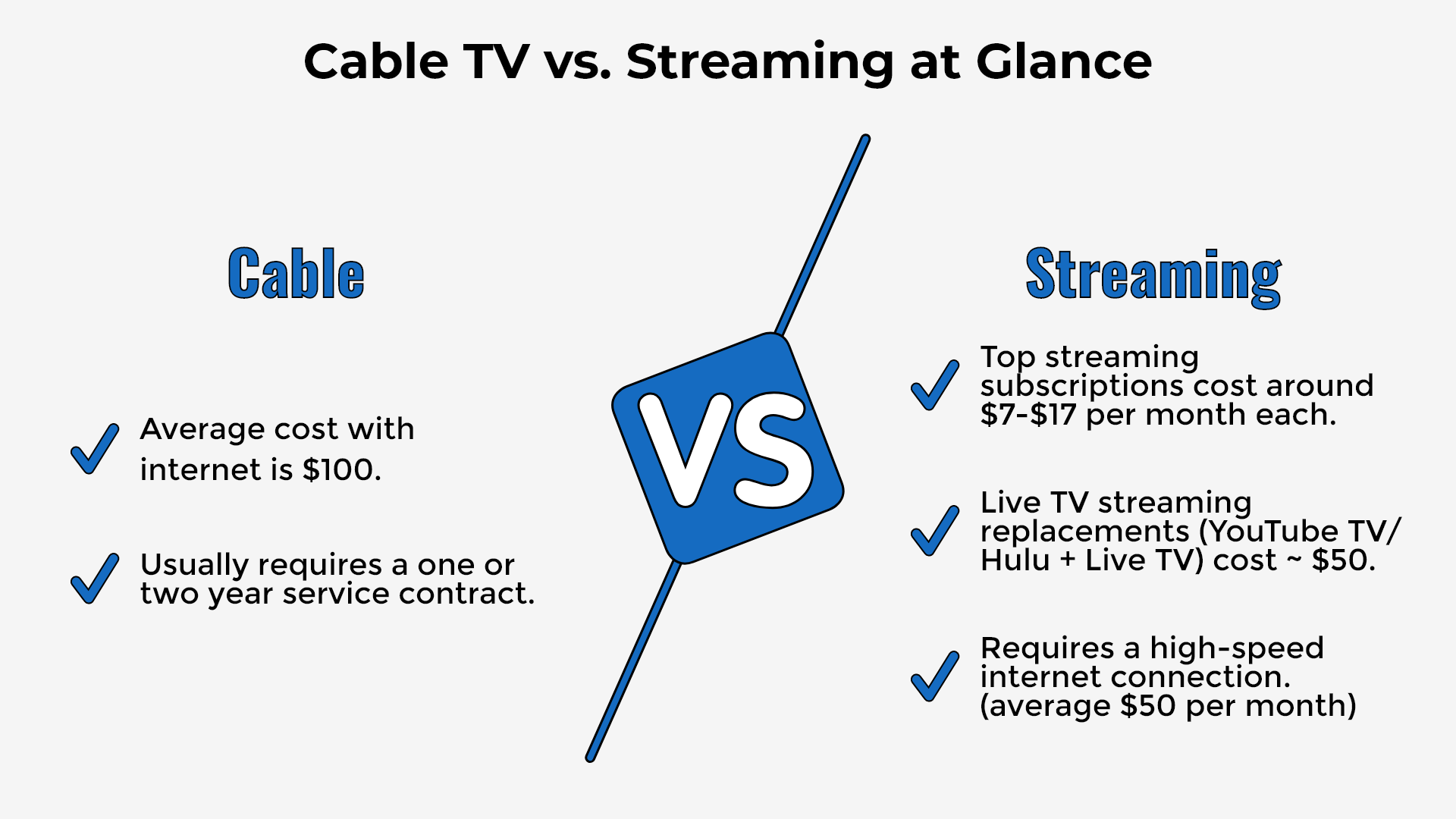 Nowadays, cable TV has a pretty bad reputation, but it's not all terrible. Here are some of the main advantages to sticking with or choosing cable over streaming services:

Of course, cable TV has its disadvantages. That's why so many people are dropping it for something else. Here are some of the main ones to consider:

The price of cable varies depending on the company you use in your area. However, a vast majority of people subscribe to one of the following three cable companies: Comcast, AT&T, and Charter.

To help you understand the actual cost of cable TV, we've put together an overview of the different packages available from each. We've focused mainly on internet/TV bundles because the internet these days has become so essential that it's difficult to imagine a reason why you would subscribe to TV without internet. Plus, it is often cheaper for you to bundle with one company than it is to try and mix and match services.

However, it's important to note that the exact channel packages available to you will depend on where you live and the promotions running at the time. We will do our best to give you a snapshot of your options. 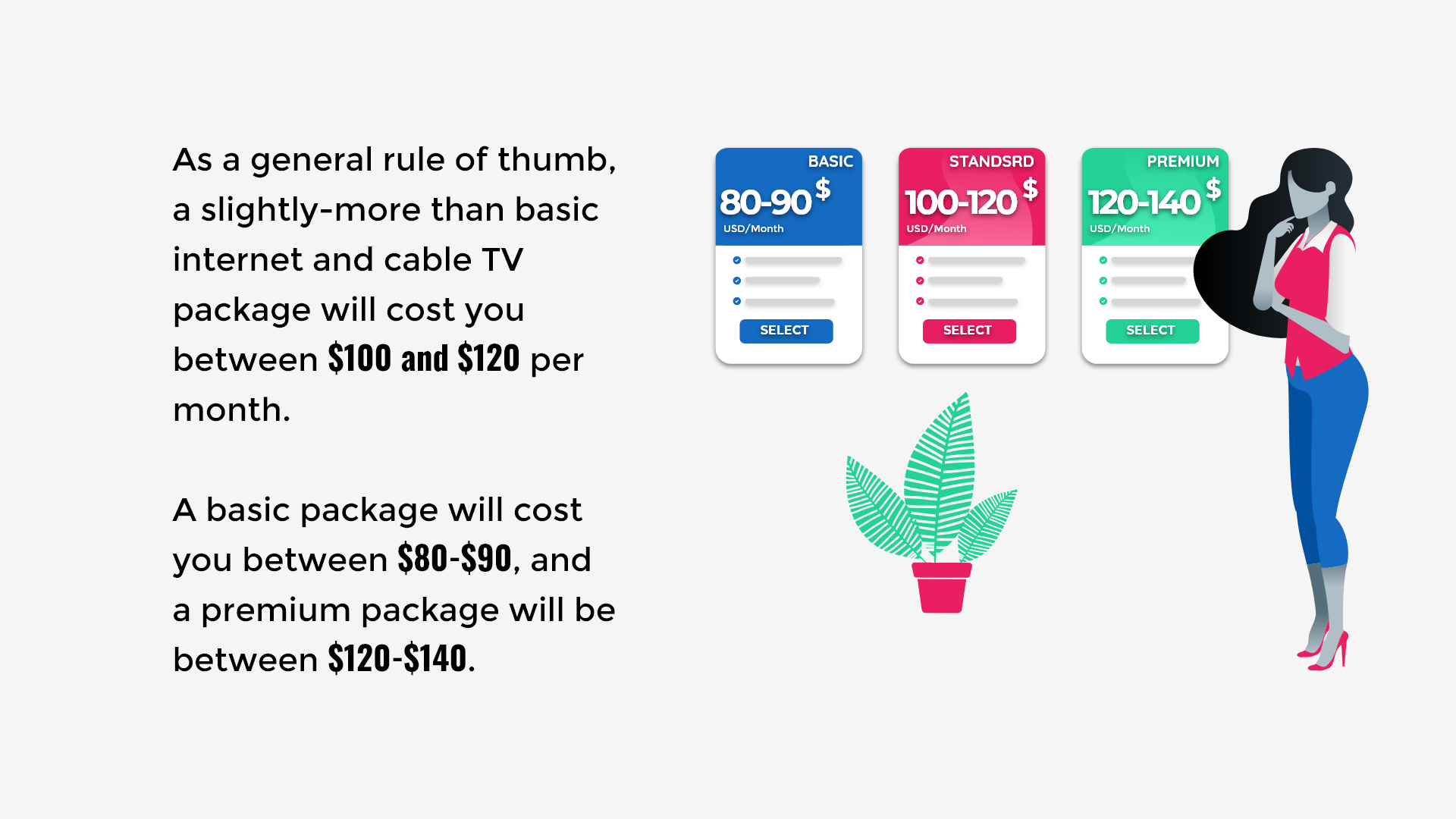 As a full-service telecommunications company, Comcast, under the brand Xfinity, offers cable TV and internet bundles. Here's a summary of what's available:

Here's a summary of the different U-Verse plans available:

Spectrum, which was once known as Charter, is another major cable TV provider in the United States. They offer a few different cable TV and internet bundles. Here's a summary of each:

Streaming television is the best alternative to paid cable TV. It's a more flexible way of watching TV, and it also gets you away from pesky cable companies. However, the big question is whether it's actually cheaper, which depends heavily on which and how many subscriptions you choose to purchase.

If you're not already familiar with the advantages of streaming, here are some of the main reasons why so many people are choosing to ditch cable and watch TV on the internet:

Understanding the costs of streaming services is slightly more straightforward than cable, which is one of the reasons why people tend to like it so much. You don't need to deal (too much) with promotional prices (sometimes there are free trial periods and rate increases are not unheard of), and there are also no contracts or service commitments.

However, as mentioned before, each streaming service offers a different combination of programming, which means you will need to do some research before committing to one, or you may need to subscribe to more than one.

Below we will outline the cost of each service and a summary of its benefits and drawbacks.

Before going into each service's cost, to truly understand their cost, it's important to remember that you need a high-speed internet connection to use these services.

"High-speed internet" is defined for our purposes as a connection with at least 100 Mbps. You don't need this much for streaming, but since it's common for households to have multiple devices streaming at once, it's a good idea to go with more than what you need.

Here is a summary of what this costs if you go with one of the big three companies listed above. There are other options, but this will give you an idea of what to expect in today's market.

Within the world of streaming, there are two different products. One serves as a replacement to cable in that it provides many of the same channels and live TV, and the other offers on-demand video service. The first part of our analysis will deal with TV replacement plans. Specifically YouTube TV, Hulu + Live TV, and Sling TV. 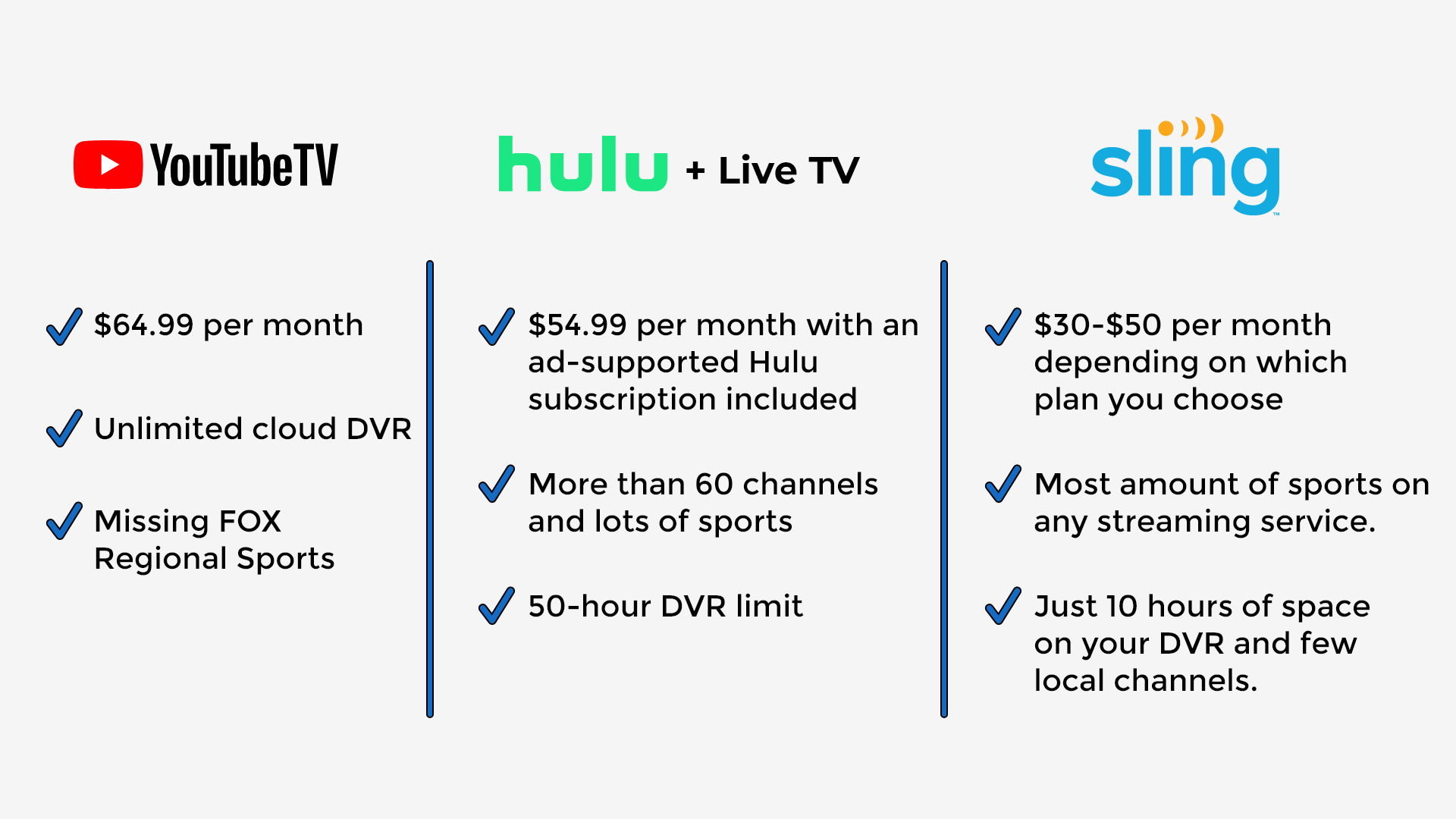 YouTube TV is an adequate replacement for cable TV in that it provides a great core of popular channels for half the price. However, when you add in the price of your high-speed internet connection, it ends up being similar to the cost of cable (approximately $100) a month. However, you have the added benefit of no service contract.

If you can share the subscription with someone, it becomes considerably more affordable and introduces you to some exciting savings.

Hulu + Live TV is a more than adequate live TV streaming service. It doesn't have some of the features, or as many channels, as YouTube TV, but it costs less money. For many, having access to the Hulu Library will be a nice bonus that makes this package worth it.

Understanding the costs associated with on-demand streaming services is much easier than cable and cable replacements. Here's a quick summary of each one as well as what it's best for: 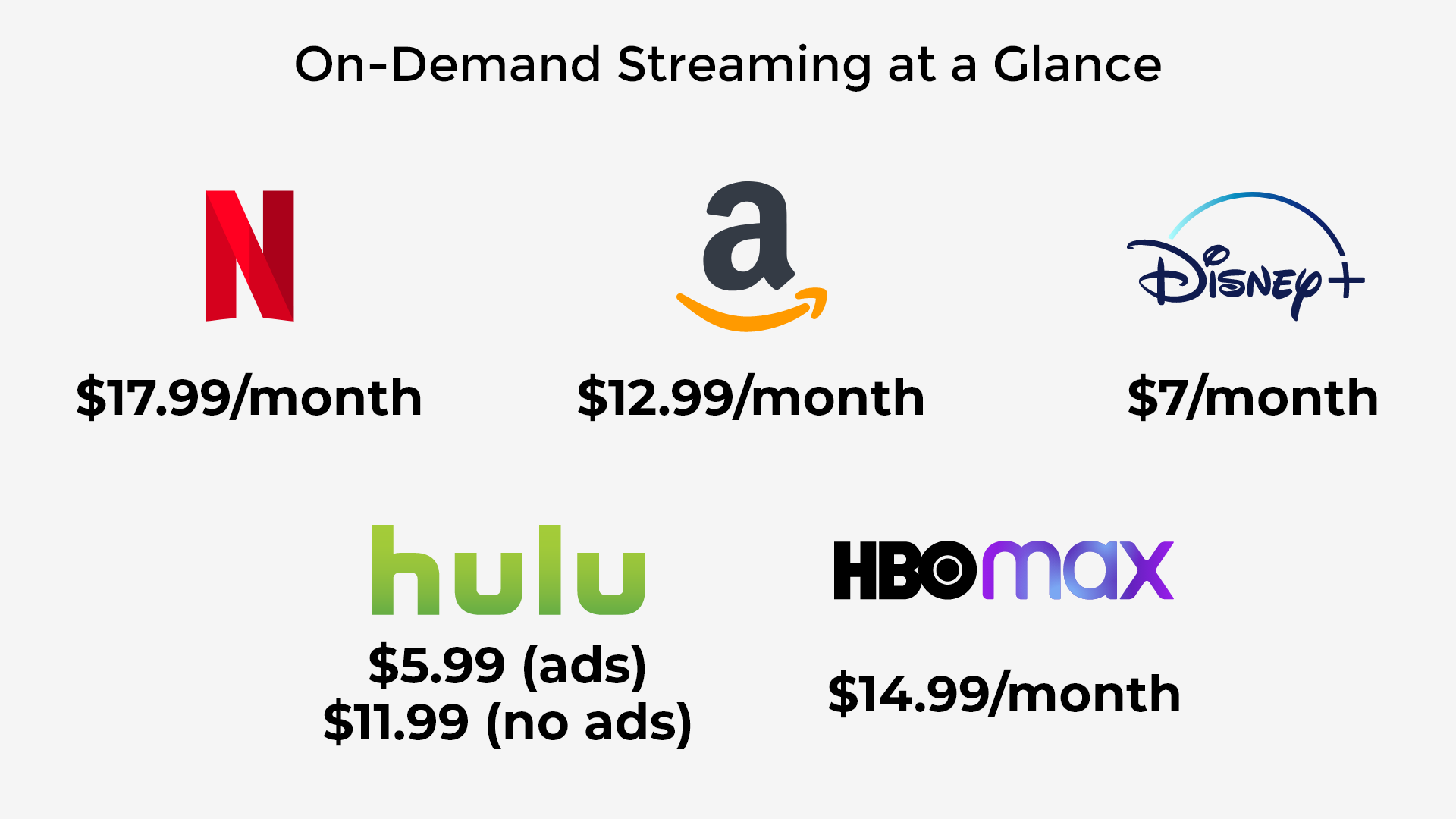 Netflix is such a popular choice because it has an extensive library and a large amount of quality, original programming. If you were to buy just one streaming subscription, you'd be wise to get Netflix.

Hulu is slightly cheaper than Netflix, especially if you can deal with advertising (but what's the point of that?) Its main advantage is that it has a much larger selection of current TV programs, so it's a great option if you want to drop cable but keep up with your favorite network shows. It also has some original programming, but it's still slightly behind the content currently being produced at Netflix.

HBO has an excellent reputation for producing high-quality television shows, ranging from The Sopranos and The Wire to Game of Thrones. HBO MAX is a "free" streaming service for those who already have a cable subscription. For those who don't, HBO Now allows you to access original HBO programming for just $14.99 per month.

One of the newer services in the streaming world, Disney+ has quickly made a name for itself primarily because of its original programming. For example, The Mandalorian, which was the first-ever live-action Star Wars show, has been a huge hit, leading Disney to order a ton more shows like it.

Disney+ is also the home for all things Disney, which includes not only its many animated shows and movies but also content from Marvel, Lucas Film, and ESPN. All of this means there is a lot to watch on Disney+.

But wait! There's more. Just when you thought you finally understood the streaming world, new stuff has come out. There's NBC's Peacock, CBS All Access, Paramount, and many, many more. All tend to cost around $10 per month, so if you're thinking of adding one of these services, plan accordingly for the expense.

The final cost of your television services will change based on how many services you need/want. For example, if you want to cancel your cable subscription and skip a streaming replacement, but you need/want all the on-demand subscriptions listed above, you will still end up spending more than $100 a month for TV. This is because you need to factor in an internet connection which costs about $50 per month.

If you stream cable with YouTube TV or Hulu + Live TV and have no streaming services, it's still going to cost about $100 per month.

Both of these monthly expenses are the same as what you would pay if you stuck with cable.

As a result, the only way to escape this $100/month price tag is to limit yourself to just one or two streaming services. For example, Netflix and an internet connection would be about $65/month. Add Hulu, and it's only about $77. These are pretty good savings.

However, if you're able to share the costs of these streaming services with even just one friend, you can get all of them and an internet connection for just $75 per month. If you share a cable TV replacement plan, you can get cable, internet, and on-demand for around $100 a month, which is considerably more value than if you just paid for cable on your own.

Furthermore, when you cut the cord and go for just streaming, you escape long-term contracts and variable pricing, which is an attractive prospect. As a result, streaming ends up being a great choice, but the savings aren't as dramatic as we would like since we still need to pay for an internet connection. We could argue that you were likely to pay for internet access anyway, as it's generally considered essential in 2021. In that case, you could discount the internet cost as just another utility, and then streaming really makes sense financially.

In the end, you'll have to do some research on your own, and perhaps some bargaining with the cable companies, to come up with the right combination of subscriptions that will get you what you want at a price you can afford.